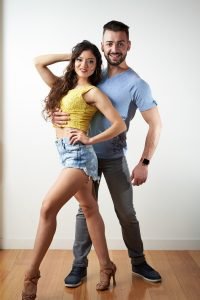 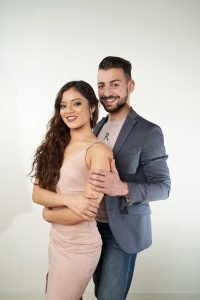 Alisson Sandi began his dance career at the age of 15 in São Paulo, Brazil where he was
born. Over the years he trained in Brazilian Dança de Salão, Street Latin and International
Ballroom dancing under the methodology of Jaime Arôxa, Renata Peçanha, Alex de
Carvalho, Rodrigo Delano, and other European Masters.
In 2007, he moved to Perth (Australia) where he joined Juan Rando Dance Academy
(JRDA) to start the Brazilian dance scene from scratch and continue developing it for the
following 10 years. He also rained multiple teachers who have become national
champions, and other whom have opened their own school. During his time in Perth he
also met Audrey Isautier and together they became one of the top worldwide Brazilian
Zouk Couples between 2010-16, travelling to over 41 countries to share their knowledge
and passion.
In 2017 he decided to take up a challenge and moved to Melbourne to help growing and
upgrading the local Brazilian dance scene with his fun classes and focused training
courses. He also created ‘BraZouky’ – Melbourne’s 1st Brazilian Dance Festival, which is
hosts over 300 people and is also a fundraising event which gives dance scholarships for
disadvantaged teens and kids in under privileged communities around the world.
Now in 2019, Alisson has decided that it is time for another challenged and has moved to
Washington DC (USA) to join District Zouk and their passionate team. Having visited DC
back in 2015, he fell in love with the community and when deciding which city to go to he
had District Zouk as his first pick. Alisson is super excited to join the DZ family and help
the dance community grow healthier and stronger!
Alisson loves to push himself and currently holds the following titles:
– 2x Pro World Zouk Champion
– 3x Pro Australian Zouk/Latin Champion
– Winner/Finalist of various BZDC All Stars/Champions Jack and Jill Comps and
Invitationals
Alisson been an official head judge and an important member for the Brazilian Zouk Dance
Council since its first competition event in 2014. And he is one of the the founders and the
first choreographers of the International Zouk Flash Mob/International Zouk Day since
2012.
In late 2018, Christina Montoya (USA) went to Australia to train with Alisson and together
they won the Australian World Champion in the Mixed Latin Category with the highest
partner couple score of the competition. Since then, they have started an exciting
partnership and are looking forward to sharing their passion with the world.
Alisson has a passion for teaching and is always striving for innovative ways in which to
overcome technical and personal challenges. He is known for his attention to detail and
effective instruction in dance techniques.

Christina Montoya is an international Brazilian Zouk instructor based out of Los Angeles,
CA. Dancing has always been a part of her life but she did not begin any training until she
was 12 years old. Her passion for dance since a young age lead her to experiment in
different styles beginning with Hip-hop, Jazz, Competitive Cheerleading, and Tahitian
prior to training in Latin styles like Salsa and Bachata.
She has trained and performed in partner dancing since the age of 18 with various
companies in Los Angeles. Once Christina found Brazilian Zouk, she furthered her training
with Igor Fraga who partnered her to compete at the US Zouk Open in 2015 where they
received 1st place in the Semi-Pro division. Since then, she trained with many
international artists and sought to deepen her knowledge through taking several Brazilian
Zouk Teachers Courses.
She holds 1st place in various BZDC Intermediate Jack & Jill competitions including
Prague Zouk Congress 2016, Rio Zouk Congress 2018, and LA Zouk Festival 2018 and is
the first person in the US to enter the Advanced division. Christina has taught Brazilian
Zouk all over the US, Canada, Mexico, Europe, Brazil, and Australia.
Most recently, she competed at the World Salsa Solo with Alisson Sandi where they took
home 1st place for the Mixed Latin Cabaret Couples Division and received the highest
scores for the overall competition.
Christina is known for her franchise teams, “Zouk Babes” established in 2017, which
emphasize the importance of follower’s technique. Since then Zouk Babes has teams and
performers throughout the US and internationally with 50 current members. Zouk Babes
was created with the intention to unite and empower followers through dance
performances and training technique. Christina’s goal is to spread her passion for Zouk to
the dancer inside everyone.