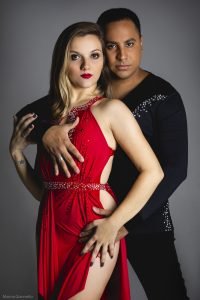 About Rafael and Izabel

With 24 years of experience and performance in dance, Rafael Oliveira works as a choreographer, teacher and dancer. He teaches classes at several national and international Congresses and Workshops.

In 2009, he started his training program for dancers specialized in Brazilian Zouk. Through his program more than 40 dancers reached the winners podium finish. He was the Director for 10 years of one of the largest Brazilian Zouk schools in the world, the Alex de Carvalho Dance Center. He worked there for 19 years, training many renowned dance professionals.

He is currently a Director of the Brazilian Zouk Dance Council

and creator of the Aliança Zouk Congress, whose main objective since 2015 is to promote the new generation of Brazilian Zouk in Rio de Janeiro.

At the age of 8, she began her studies in jazz dance. At the Corpus Dance School, in Rio de Janeiro, she studied various modalities such as Classical Ballet and others. She joined Grupo Corpus, thus competing in several dance festivals, inside and outside Rio. She was part of the cast of dancers on the television program Gente Inocente, on Rede Globo. She participated in several workshops, with well known professionals, in order to qualify her dance and technique. From 2011 to 2014, she was part of a study group on classical and contemporary dance, directed by a teacher, choreographer, and dancer Anderson Dionísio, where she became the teachers assistant. In 2015, she began her study of partner dancing at the Alex de Carvalho Dance Center where she started her partnership with Rafael Oliveira.

They started their partnership in 2015, aiming at the evolution and propagation of Brazilian Zouk around the world. Together they believe teaching in a natural, fun and continuous way so that the student becomes the dancer/professional they want to be. Rafael and Izabel introduce dance in a technical and simple way conveying lightness in the dance for everyone.

Furthermore, Rafael and Izabel are currently the main representatives of the Alex de Carvalho (MAC) method in Rio de Janeiro.